The Way Wednesday
.....
Critical Excerpts from a book review of:
The Catholic Priesthood and Women: A Guide to the Teaching of the Church
by: Sara Butler, Hillenbrand Books

Reviewed by: Monica Migliorino Miller, associate professor of sacred theology at St. Mary's College of Madonna University in Orchard Lake, Michigan
[Complete article may be read here.]
..........
In May 1994, Pope John Paul II issued his apostolic letter Ordinatio Sacerdotalis to deal with one specific issue: the Church's ban on the admission of women to 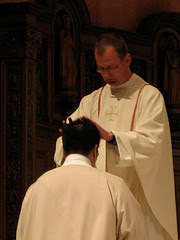 the ministerial priesthood. The Catholic Priesthood and Women: A Guide to the Teaching of the Church attempts to provide a new generation of young Catholics, most especially seminarians, with an understanding of the Church's teaching and to give them a "theological orientation" to the topic.

The fundamental reasons that the Church has no authority to admit women to the priesthood is the Church is bound to follow an original gesture of Christ when He established the sacrament of Holy Orders. When Christ called only men to the company of the Twelve, we are confronted by Christ's will.

Many argue that Christ was subject to the historical conditions of His day. Times have changed, they say, the Church is free to abandon a practice that discriminates against women. Ordinatio Sacerdotalis insists on Christ's sovereign freedom in His choice of male apostles.

Butler states that no injustice exists so long as the Church does not prevent anyone from attaining personal holiness. Butler recognizes that, doctrinally, the male gender of Christ and the apostles "is not arbitrary, but significant." Thus a close connection does exist between the fundamental and theological reasons for Church doctrine. That the priest acts in persona Christi is not simply a theological argument, but the doctrine of the Church. Christ cannot simply be identified with the Church. He is the head that causes the Church.

The book is a welcome addition to those works that seek to explain and defend the all-male priesthood.
..........
Male and female, we are all called to ministry. Service to God's people is paramount in our relationship to Him. He intends our gifts and talents, as He distributes them, to be used for the common good. Our use of time, talent, material, and spiritual resources is very much indicative of the importance we place on our responsibilities as stewards of the creation in which He has placed us.

Sr. Sara Butler delivered a presentation on this topic at our seminary about 2 years ago. She was excellent.

Since she was the first woman ever to be appointed to the Pontifical Theological Commission, many women religious from the area came to attend her talk. And at the end of the talk, several of them expressed some dissatisfaction. One said, "Well, yes, she was a good presenter, but I can't help but feel that we just need more dialog on this."

I was a little amused.

Why do women think being women puts them in the position of being less than?? We have some of those gals roaming around our church and they are so unhappy.

I had a friend who had been an Episcopal priest (now he's Catholic). He proposed a solution that, while women can't be priests, would at least be helpful IF the Church decided that women COULD be ordained.

You announce to the world that you're accepting applications from women. Then, you summarily reject the first 5,000 applicants.