They walked in the door and it took all of my experience, training, and disciplined self-control to welcome them - attributes needed in the arsenal of all parents of teen-agers. At times we are successful in their application, at other times we fail miserably. I was already praying for the grace to not fail miserably.

Experience has taught us that our children will do things to: a] shock us; b] run-up a trial balloon; c] really test us; d] prove to themselves that we are either 1: completely incompetent, or 2: the really outstanding, the know all the answers, parents they really want us to be but will never admit out loud. Tonight looked like all the above.

Our home is just 1/2 a block from our Catholic parish church. The parish property is a square of 3 blocks by 3 blocks. Extending from the central-north side to one block east of the northeast corner of the square is a state supported residential high school for the academically gifted from around the state - students in their 11th and 12th grades.

The school is an assemblage of bright minor children mostly below the legal age of 18. There are many rules, regulations, policies, and guidelines for the protection of those minor children whose home and parents can be located anywhere in the state ... including our son.

Students are required to sign-out when they leave the locked-down, alarmed building that is their home-away-from home - in pairs, and return in pairs, the same pair that signed-out together. They are not allowed to enter the homes of local private citizens without prior knowledge and permission of a school official - even our son when he visited home, which he didn't do all that often.

It was Sunday evening and there was a High School Youth Bible Study going on in our front room. Our son knew the woman leading the group, and he introduced his friend to her and the members of the study group. They were all cordial, yet seemed as taken aback by his friend as we were.

We invited our son and friend to come to the kitchen and have a snack and something to drink. We could talk and not disturb the others. His guest was several years older. Our policy raising our children was "Home is a place you can always come ... and your friends are always welcome here." That is not to say that we might not ask someone to leave for some serious breach of behavior or speech. SO, in a sense, "We asked for this."

It wasn't the dark clothes, or the full-length coat, or even the stringy long hair that caught our more immediate attention. The visible body piercings in the eyebrows, the nose, the ears ... the partially visible tattoos around his neck and just above the cuff-lines of his coat ... the dark mood of his presence - it was these things that caught us and tested our mettle.

We learned that our son met this young man in a retail area near the college campus. Our son stated that his friend didn't have a lot of places he could go, so he invited him to our house for a bite to eat. The young man did have family in the city, but did not live with them. He was currently 'living in the streets' and with some acquaintances in a crack house - but it was getting a little too wild for even him. Our son told me that he thought the guy was looking for a way out of his current lifestyle but didn't know where to turn ... so he brought him to us.

Small talk dominated to put him, and us, at ease. After 10 minutes they went back to the front room with the Bible Study kids. The woman leading this group is very good. She let him participate to the degree he could and wanted. She did a lot of explaining for him, as he had very little Bible knowledge ... and before the evening was over, she asked him if she and the other kids could pray over him. He agreed.

After that, they decided it was time to leave and said good-bye to the group. I think we surprised ourselves at how accepting we had become in about a 45-minute period. Our son looked back at us as they left, and said "Thanks!"

I was concerned for the younger kids in that Youth Group. I told our son I knew a young man on the college campus who headed up a Christian outreach. I asked if I could introduce them. My son he'd try to get with his street friend and pose the suggestion.

Within about a week I had introduced the college ministry guy to our long-haired, body-pierced friend. After a few weeks, the 'street' kid got a haircut. Some of his body jewelry was disappearing. In the next couple of months he moved into a house the Ministry group had, that consisted of 4 or 5 male students. They lived together and tried to be good Christian students - a concept he was working on but one that was far from his recent reality.

About a year later, our new found baby Christian started studying to become a Catholic. He didn't finish that w 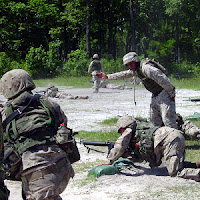 alk before he made his next major decision. He joined the U S Marine Corp. He said he felt he needed the physical and mental discipline he lacked and believed the Marines could build that in him. He left ... but he stayed in touch with the young man that had been mentoring him here.

That Campus minister left the following year and took a position just outside Washington DC. The young Marine was now completing his enlistment and was stationed at Camp Lejeune in North Carolina. When he had free weekends, he would go up to DC and visit his old friend. When he finished his tour, he moved to the DC area and hooked-up with his old buddy.

He became a Catholic and started attending Catholic University of America. While there he met lots of the Campus minister's friends and acquaintances. One of them was a young lady who was a medical student at Georgetown University. She was from the

pacific northwest. He finished his undergraduate studies and entered law school. She finished Medical School. They became engaged and were planning to get married.

All of this was unknown to us. We had lost contact with him when he left for the Marines. Imagine our surprise when we received a wedding invitation. We could not imagine how or why we were being invited. We decided there was no way on this earth that we were going to miss this event, so we made plans to attend. The wedding was to be in a chapel at Georgetown University. Here we come Washington DC.

The wedding was absolutely beautiful. The reception was outstanding. Her parents from the west coast and all their family made the trip. His family from our hometown came, but looked and felt out of place in this very obviously Catholic environment.

At the reception, we learned the answer to our question - the question as to why and how we were there. The bride and groom were making the rounds of the tables, visiting with everybody. At some point they came to our table, and her mother was with them. He introduced us to her mother. "Mom," he said, "these are the people that saved my life."

You could have knocked either one or both of us over with a puff of wind. We had no idea!

Remember way back at that first meeting when we could see hints of tattoos at the neck and above the wrists? Well those were the tip of the iceberg. His entire upper torso was one massive tattoo, front and back. It caused him a considerable amount of ridicule in the Marines. It was still a topic of casual mention to people who were now his friends but had never been around that culture.

His mother-in-law made her way back to our table a short time later. She talked about when her daughter first called her and told her about this man she had met. She told her mom she thought it was 'serious' and she and dad needed to come visit soon. And mom said she had heard some things that bothered her at first, about her new soon-to-be son-in-law ... and she said she just had to ask us: "What did you think the first time you saw him? I've seen some pictures, and truthfully, they're a little frightening."

Time has passed. She is a doctor ... he is a corporate lawyer. They now live in the pacific northwest. They have three adopted children from Ethiopia, and have one child of their own.

'A second chance' is afforded all of God's children. You just never know when it will be your turn to put the plan into action. You may be entertaining fallen angels - treat them with love and respect ... they belong to the Father who is waiting to offer them 'a second chance'.
Posted by uncle jim at 8:09 AM

Thanks, Jim, for sharing this great story. We never know how God wants to use our small part in His big plan.

THANK YOU, Peggy, for being the lady leading that group of kids - many others would have let him come in and leave and would never ask to pray with him ... God used you and the kids in that group. In fact, if you can remember back that far, and remember some of the kids in the group, let them know the outcome of their effort.

rob,
thanks for commenting periodically.

a week ago you and i shared a comment about a video in which we though the boy would say 'grace' before eating his breakfast. I mentioned it reminded me of an incident last winter where a child helped redirect an adult - well i shared it this past week - it was the Salvation Army story.

You got some more?