There were a lot of things that were not right in the unfolding of these vignettes. Like many things, though, you sometimes don't spot them except with hindsight. Then it is usually too late to change things.
- - - - - - - - - -

Today was on my mind. We had made the rounds of 4 different Agent offices in the Chicago

area. My Vice President of Sales for the Western Region asked questions after questions.

What was nagging me was some of the conversations I heard while with him. It reminded me of a Sales Rep that worked for us a number of years before. He had come to us after having been the Vice President of Sales for a small regional LTL trucking company that had recently folded. 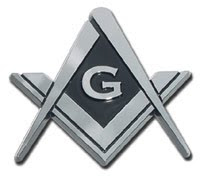 When that former sales rep and I were making a joint sales call on potential new customers, someone he didn't know before, he would have some sort of banter that determined if they were a member of the Masons. It seemed to be some sort of coded talk. If they determined they were both brother Masons, it seemed almost automatic that we were going to be getting new business from them.

Well, my Vice President of Sales for the Western Region was doing something similar ... but it had to do with 'name dropping'. Some of these agents knew some of the same people that he knew. At some point he would ask if they knew "Jimmy gumshoe" or "Manny the rat". If their response said 'no', the conversation seemed to continue in more of a business tone. If their response said 'yes' [yeh], or if they asked a question about how he knew them, the conversation went a different direction. The net result of those who said 'yes' seemed more positive - we could work out our problems and start doing more business together. We got a 'yes' from two of the four.

I had no idea who 'Jimmy gumshoe' or 'Manny the rat' were ... and I never asked.

How this was going to play out in our meeting with Mr. Bxxxxxxxx I had no idea - but I was certain I would find out.
- - - - -
It was late when I arrived in Detroit. I stayed at that same famous hotel I've mentioned before - the one where I had been awakened at 3am in the morning and told to be in the Conference Room in 1-hour for a sales meeting. This trip I slept in, had a late breakfast, and checked in at Company Headquarters about 10:30am. Our Meeting with Mr. Bxxxxxxxx was scheduled for 2:30pm.

I went directly to the Department that h

andled the 'settlements' for the Agency offices. The number one complaint we heard was about delays encountered in being paid for freight handled in our behalf. Most other complaints were about paperwork requirements.

I had the names of the agents we had visited and I asked to see their files. At that time I was a Regional Manager. The woman I was talking to wasn't sure whether she could show those to me - she'd have to get someone's OK. I said that was fine, but I was asking for them for Mr. Bxxxxxxxx [that was not entirely untrue].

She was back with the files in minutes.

I asked for a desk to use. She

pointed me to one in the corner out of the way. I went through the paperwork and documentation. I made notes and went back to the same lady with my questions. Then I called each agent to tell them that I was now in Detroit and working on the pay problems they told us about the day before. Boy did that impress them.

The lunch hour for the people in that department came and they all left. I stayed and continued making my notes and a few more phone calls. On their return I had more questions. This time we were joined by the department head, whom I had known for years. I had worked in Headquarters before as the head of Intermodal Operations. I had explained to him that I was meeting with Mr. Bxxxxxxxx at 2:30pm.

The reality was that there were approximately a hundred agents who held contracts with us nationwide. We had visited with four in the Chicago area. If these four had complaints, I was certain that the others did too.
- - - - -
After 2pm I informed the Department Manager that I'd like to take the files to my meeting with Mr. Bxxxxxxxx. On the condition that I return with the paperwork when I was done in the Executive wing, I left with files in-hand.

I went to the Reception Area for the Executive

Offices and asked if our Vice President of Sales for the Western Region had arrived. She informed me he was in the building and that she would locate him for me. At 2:25pm he showed up in the Reception Area. I told him what I had been doing - he seemed sort of surprised and impressed.

He asked the receptionist to let Mr. Bxxxxxxxx know we were here for our 2:30pm meeting.
- - - - -
[to be continued as time becomes available]
Posted by uncle jim at 9:53 PM 2 comments: