i think i'm going to have

a short series of short stories about - Ch 2

Day 3
While Rozann finished repacking for our journey to Lake Havasu City, I went and picked up our rental car. This was accomplished by taking the Hotel shuttle to the airport, then catching the car rental shuttle to th

The airport uses one fleet of Airport

Car Rental Facility buses and transports all car renters to the same centralized facility. Each of the Major car rental companies is located together at this one same facility. It makes it really convenient. Renters just go to the individual counter for the rental car company they have chosen, and complete their transaction. It is a lot like a food court in a mall or airport, only this is a car rental court.

Back to the hotel, pick up Rozann and our luggage and begin our 4-1/2 hour trek to Lake Havasu City. Actual driving time was probably under 4 hours - the rest of the time was bathroom and scenic view stops.

Lake Havasu City is in the extreme western side of Arizona. It is on a man-made lake formed on the Colorado River by a dam at Parker AZ [the Parker Dam] about 25 miles south of Lake Havasu City. On the other side of the lake / river is California. To the North about 60 miles is the southern tip of the state of Nevada.

errain - arid and desert-like conditions abound. Cactus of many varieties thrive here. They average just under 3-1/2 inches of rainfall per year. The average annual daytime high is 88 degrees farenheit. It has become a retirement and resort type community. The permanent population is around 55,000 - the winter snow-bird population adds another 20 - 25,000 from November to April. Friends of ours rented a house for 6 weeks and invited us to come visit [they are retired school teachers from Minnesota].

The drive from Phoenix provided a great deal of scenic opportunities. We arrived at their home around 3pm. After unpacking and getting settled, they took us on a short driving tour of the city. It included a walk along the touristy area of the Canal Bridge River District.

It is here that the world famous "London Bridge" 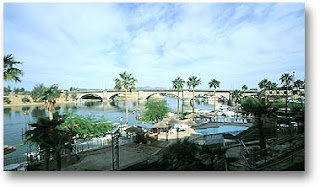 is relocated. An American Industrialist had purchased the bridge in London, had it totally disassembled, shipped to the desert of AZ, reassembled, and used it to form the heart of what is now Lake Havasu City. An oasis in the desert is what was created, and people from around the world come to visit...even from Muncie, IN.

Back home for a leisurely dinner was next on the agenda...a game of cards, and then to bed for a full night's sleep.

i think i'm going to have

The beginning is a good place to start.

Day 1
Sunday, March 22, we decided to take an extra day before actual plane departure. We booked a room at a north-side Indianapolis Hotel for Sunday night. For the main event we went to a movie and saw the Nicholas Cage thriller "Knowing". After shopping at a supermarket, we went to our room for dinner. Miscellaneous TV completed our Sunday adventure until we fell to sleep.

Day 2
Monday was a sleep in. When we finally went down for breakfas

t, they were almost done serving. After checking out, we went downtown. Lunch at the Indiana State Museum Cafe was followed by viewing a movie at the IMAX theatre. Then it was time to head to the airport. We booked long-term parking at the Adam's Mark Hotel. For $5 per day they not only allow you to park there, they shuttle you to your terminal and pick you up on return.

We had pre-checked in online and were also able to print our boarding passes in advance. This allowed us to go directly to the gate for boarding. So far so good.

Then it started getting interesting - and only a little stressful.

The previous incoming flight at our gate was to discharge, then reload and take off for another destination. While they were reloading, it was determined it had a mechanical problem, and could not pull away from the gate area. All those passengers then had to be placed on other planes and flights to get to where they were headed. That was very time consuming, to say the least.

It had our ga

te blocked up. The incoming flight that was to be our outbound flight now could not come in to the original gate. They had to find another gate for it...and all of us who were scheduled to go out on it had to change gates. Lost time was realtively not too bad...about 1/2 hour and we were ready to start boarding at the new gate.

As the first group of passengers to board were lining at the gate, one of them - an older gentlemen - seemed to pass out. As everyone in line moved out of the way, the ticket agents came over and tried to move him off the floor and into a chair. They realized he was more than passed out. Emergency crews were summoned from the Airpo

rt Fire & Rescue Station. While they were en-route a passenger who seemed to know what to do, began doing chest compressions. A fight attendant ran on board the plane and came back with a portable defibrillator. When the emergency people arrived they continued with occasional shocks and chest compressions. After about 30-minutes they had him revived and stabilized for transport to a local hospital, but had to wait for the ambulance to arrive.

Thank God he was talking and breathing as they left with him.

Forty minutes late already, they were able to resume the boarding process. We were then in the air to Dallas-Fort Worth airport where we had a connection to make going on to Phoenix. The pilot did a good job and was able to make up about half of the lost time.

For us, the saga was to continue.

We arrived at our connecting gate in time for our next leg of the journey. We then discovered that not only had the gate been changed, but it was in an entirely different terminal. But we weren't late because there was a delay involved on this flight, too. Once boarded and ready to depart, the plane pulled away from the gate and headed t

o the tarmac - where we sat for over an hour awaiting the delivery of commissary supplies. All of this happened because of the original gate change. We eventually left from Dallas for Phoenix, and arrived about 1-1/2 hour after the original planned arrival.

Then we caught a shuttle to our hotel for the night. The next morning, Tuesday, we would get our rental car and head to Lake Havasu City.

if lotteries pay out small change

What do bail-outs pay?

try this on for size

Boy, do I feel broke.

is life too hard?

am I treated unfairly?

how hard do I try?

Do I have what it takes to persevere through life's hardships?

On Facing Up to Adversity 2

from: Did I Ever Tell You How Lucky You Are?

It's a troublesome world.
All the people who're in it
are troubled with troubles
almost every minute.

I guess I never thought about it that way - WOW!
Posted by uncle jim at 11:16 AM No comments:

The Stock Markets Continue to Plunge
Posted by uncle jim at 12:43 PM No comments: