A year and a half to two years ago, or thereabouts, I was introduced to a 'blog' written by a nephew. N

ow, how's that for a big hint? His name is Dennis. His blog site is called 'Vita Mea'. Up to that time I didn't know what a blog was or that it even existed.

He is a seminarian at St Meinrad Catholic Seminary in southern IN. He is there studying to be ordained a priest for the Catholic Diocese of Memphis, TN. He should be ordained this coming Spring 2008.

In an e-mail to me he recommended I check out a blog being written by a woman named Dawn Eden. She is a woman he had met at some point and a writer whom he admired for her style and sass. Her blog site is called 'the Dawn Patrol'. She is a very prolific writer and 'pro-life' advocate. I found she has a very engaging style of writing and I became a regular reader.

She has, in the past year, become an internationally acclaimed author. Her book regarding chastity was released last December. It is now in the sixth printing, 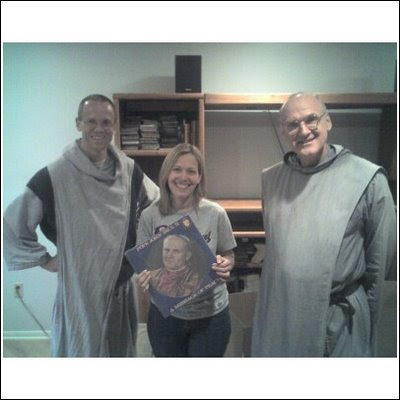 and has been published in Spanish. I encourage all of you to read it. It has been acclaimed by just about every Catholic publication and Organization you can think of...and many other religious groups, Christian and non, as well as secular. Its title: the Thrill of the Chaste.

It was on her blog that I wrote my first ever 'comment'. I signed-off as 'uncle jim'. I left no explanation for that moniker at the time, but it described how it was that I was there ... I am Dennis' uncle jim. I have since adopted that as my usual 'signature' when blogging.

Note: If you've read my story at the bottom of the blog entitled 'Do I Know You?', you know that I am the 2nd born of a set of identical twin boys - the first children of our parents. The 1st born of the set is Dennis' dad, my older [by 11 minutes] brother.

Now, I am writing a blog of my own - this one ... and I owe it largely to Dennis, Dawn, and the writers of the blog sites called 'Adoro Te Devote', 'Adam's Ale', and 'the Judge Report'. I Strongly encourage and exhort you to visit their blogs. There are others who write that I read, and I am sure I have been influenced by them, also [like k_sra, and chez joel (rip), and ...].

I hope I can add something to your day by providing inspirational content that will encourage you, and fill you with the Joy of the Lord. If you have a sharing you'd be willing to allow readers here to ponder, please write it in a 'comment box' and we'll do the rest.
.....
Posted by uncle jim at 1:40 PM

Uncle Jim, I enjoy your blog. keep up the good work!

Thanks, you two. Keep coming back and saying nice things. It makes it easier to turn on the computer. AND it's alright if you'd like to join in the song ... and maybe help write some more of the lyrics, some more again don't ya know.

I don't even get a mention? Even after adopting you!! All the work I do and no thanks! ; )

I'm glad you are blogging.