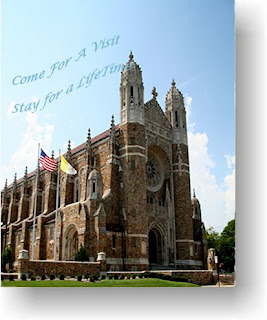 2535 Collingwood Blvd. Toledo, Ohio 43610
. . . . .
It is the only Spanish Plateresque cathedral in the world.
It is a modern example of 13th century technology.
It was built using not a single piece of construction steel.
It houses the last of six original Skinner organs in the U.S.

Visitors are moved by the beauty of its old world style.

Thousands are inspired by: the graceful beauty of its piers and arches; the richly decorated nave ceiling with scenes from Old Testament; the half-domed apse embellished by frescoes in the Keim process; one of its most striking gems, the Rose Window, which sparkles and radiates in the changing light of the eastern sun.
. . . . .
Click here to
Begin the Tour!

What a beautiful Cathedral!!! My mom & I went to Koln, Germany & visited the Basilica there. What amazed us were the stained glass windows - they were made in Bavaria (Black Forest). The colors were so vivid! Apparently the stained glass from Bavaria is very expensive - they had some other windows made from other stained glass & it just didn't compare with that from the Black Forest.

The Pulpit (ambo?) is gorgeous!!! I know the pictures do not do the Cathedral justice! I think I'll have to take a road trip! LM

I take people there to toledo just to see two things

if you go, you absolutely have to see both - even if you're not an art lover - they are both outstanding

Jim,
Thanks for sharing that wonderful video of the young girl singing the 'Ave Maria'. WOW! You could see how touched people were just listening. Only goes to show that God can use any time and place to shed His grace!

It is indeed the most beautiful Cathedral - I want to visit it.

terry,
and just south of the cathedral 1-1/2 miles is an absolutely world class art museum that i cold spend days in at a time - and it is FREE ... no admission charge.

you gotta make the trip some day ... really!