My Way Sunday . . . . . . . . . . . . . . .
Tony stories #3
many people need second jobs
. . . . . . . . . .
Periodically in my life I've had to work multiple jobs, just to pay bills, not for any exorbitant life style. I've known others in similar predicaments. Some of the opportunities that people find are perfect 'second' jobs for them - the job suits the hours they have available and the income helps make ends meet. Others find jobs that are in line with their hobbies and avocations. I know God is happy when we use our gifts and talents - or not! Some jobs are not moral, not legal, and not all that beneficial to society.
. . . . .
During the period of my life that I was starting to have my own personal 'conversion experience', but before I was able to start putting righteous living into practice in more than the Sunday part of my life, I found life getting a little more complicated - that is the "How do I put this into practice?" part.

It is a problem I see almost every day in business. Many of us seem to live and operate in two different spheres. For those who have some modicum of religious experience and belief, we often operate in one sphere that gets us to church on Sunday, and maybe we do some humanitarian service or ministry. The other sphere finds us in our daily employment endeavors - and somehow we're not able to blend the two. Likewise, I found it difficult to even see and recognize there was a dichotomy in my expression and practice of Christianity.

. . . . . . . . . .
I have to admit that 'hanging around' with Tony showed me a side of life with which I didn't have great familiarity. I think St. Paul found his life experiences among various sub-sets of the population helpful to his understanding of human nature and in his ability to minister to others.

God will use the good and the bad in our life to further His mission - if we let Him [see Rom 8:28].

I just hope that my shortcomings and failures have helped me grow in a closer relationship with God and in my ability to serve others.
. . . . . . . . . . . . . . .
It was really a very laid-back dinner. Small talk dominated our conversation. I had no planned agenda for our being together. Hind-sight would suggest that Tony had something in mind, though - I should have been learning that by then.

We left the small local diner in his car. He said he had an errand to run - he needed to pick up a part for one of his machines that needed repair. 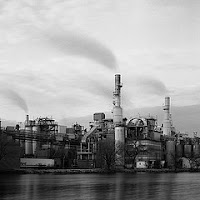 s Lake Michigan]. We were in Lake County Indiana - the northwestern most county in the state of IN. The county seat, located near the center of the county, was in Crown Point. The best known of the cities in Lake County is Gary Indiana, located in the north-central part of the county and adjacent to the southern end of Lake Michigan. Gary was a steel-mill & heavy industrial city. We were somewhere between Gary and Crown Point. The northwestern corner of the state is simply referred to, among the locals, as 'the region'.
Tony's car found its way into a nice middle-class neighborhood. The streets were lined with nice brick ranch-style houses - most had two and three car garages attached.

I didn't know why we were in this neighborhood - it didn't seem like the place for a 'parts' distributor to be located. None-the-less, we pulled into the driveway of a nicely landscaped house. He told me the guy he wanted to get the parts from operated out of a small shop at the back of his garage. He invited me to come in with him.

Of course I went.

Even after my previous experiences with Tony, there was such a curiosity in me that I found myself almost excited as we approached a side of life I didn't live - even though I was more and more understanding that it was not always legal enterprises and people I would be encountering.

Near the center of the front of the house, where the garage 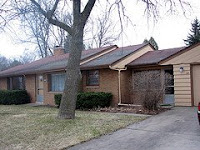 and house joined together, there was a rather plain doorway which appeared to be an entry to the garage. We walked past that door, and proceeded to the main entry to the house. Tony rang the doorbell. An attractive middle-aged woman answered. She knew Tony and greeted him warmly. He introduced me as a friend of his. He asked if Sal was in his shop. She said he was and she'd let him know we were coming back.

We went back to the garage entry door and entered. We walked past the car and a van that were parked inside and proceeded to the rear of the garage. Another door - an obviously very substantial and sturdy door - was located there. Tony knocked, and momentarily the door was opened from the inside to allow us entry.

It is strange how much cannot be seen from the street. These houses in this subdivision were nice brick ranches - you could see the full front of the house ... but there was no clue as to what you might find around back. Expecting to see some guy with a small vending machine repair shop behind this door really left me in for a surprise.

e-armed bandit' kind from before all the new-fangled electronics came on the scene.

By now, I had learned to try hard and not show my surprise. You have to realize that the people I was meeting had to trust Tony a lot or I would never have been brought into their presence. He introduced me to Sal and told him what kind of parts he was looking for. There was some small talk while Sal and Tony went about their business of getting the correct parts located. Once that was accomplished, Tony asked "How much for the parts?" Sal told him "Nothing! You just owe me one, okay?" They agreed and without too much further ado, we left. I suspect there is a lot of "I owe you one..." business conducted in these circles.

We left the subdivision. I didn't ask any questions. I knew Tony would tell me whatever he wanted me to know - sooner or later ... and he did. He told me that Sal was a highly respected technician in this field. He did work for some of the biggest names in 'the business' in 'the region.' Not only did he repair, but he sold slots on the side - got a pretty good price for them, too. His regular job didn't pay all that well. Sal made use of his connections and skills to be able to afford a nicer home and a nicer life-style.

Oh - Sal's regular job? He was a local city cop.

My Italian grandpa had slots in his barber shop. When there was to be a "raid" the police chief (in St. Paul, MN) would call grandpa. He in turn would call my Dad and a few other sons. They would rush down to the barber shop and push the slots out to the alley. When the police showed up they would glance around the shop and declare everything ok. Back in came the slots till the next "raid".

i've got some in-law 'family' chicago stories i may share later, too. my mother-in-law was first generation Sicilian ... from Palermo. My wife's maternal grand-parents were born, raised and married in Palermo - then came to the states to start and raise a family. and there were plenty of Palermo connections in the states - he could find a job here easily, for sure.

then besides Tony, there are other stories about a group of thugs from NJ who were the 'face' of some buyers who purchased the trucking company for which I worked - and their names all ended in vowels. but, those are for other posts on other days.

I hail from "The region," being born, bred and educated there. It holds fond memories for me. Your comments on the area, I am pleased to see, were neutral. Thank you for that, as most posted remarks on Gary are decidely negative.

To learn more of the history, geography, enconomicis, politics and culture of Gary, Lake County, and "The Region," check out the offerings on Dave's Den.