Super-Copt takes on Islam - who will take on Global Warming?

Too often I find I have too little knowledge of Islam, especially the radical sort. Some religious people in the world have made it a practice and their mission to not only understand, but to fight back. Perhaps this article will encourage the rest of us [read that as "me"] to do a little more than wring my hands and finger my beads.

Note: Picture at left
IS NOT Zakaria Botros.
It is an unidentified
anonymous Coptic priest.

. . . . .
Coptic priest Zakaria Botros
fights fire with fire.
. . . . .
Though he is little known in the West, Coptic priest Zakaria Botros — named Islam’s “Public Enemy #1” by the Arabic newspaper, al-Insan al-Jadid — has been making waves in the Islamic world. Along with fellow missionaries — mostly Muslim converts — he appears frequently on the Arabic channel al-Hayat (i.e., “Life TV”). There, he addresses controversial topics of theological significance — free from the censorship imposed by Islamic authorities or self-imposed through fear of the zealous mobs who fulminated against the infamous cartoons of Mohammed. Botros’s excurses on little-known but embarrassing aspects of Islamic law and tradition have become a thorn in the side of Islamic leaders throughout the Middle East.
. . . . .
Typically, Botros’s presentation of the Islamic material is sufficiently detailed that the controversial topic is shown to be an airtight aspect of Islam. Yet, however convincing his proofs, Botros does not flatly conclude that, say, universal jihad or female inferiority are basic tenets of Islam. He treats the question as still open — and humbly invites the ulema, the revered articulators of sharia law, to respond and show the error in his methodology. He does demand, however, that their response be based on “al-dalil we al-burhan,” — “evidence and proof,” one of his frequent refrains — not shout-downs or sophistry.
[ to read the article, 'click here' ]
- - - - - - - - - - - - - - - 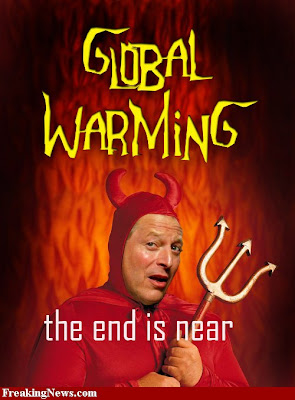 ...over the last several decades an increasing number of scientists have shed the restraints imposed by the scientific method and begun to proclaim the truth of man-made global warming. This is a hypothesis that remains untested, makes no predictions that can be tested in the near future, and cannot offer a numerical explanation for the limited evidence to which it clings. No equations have been shown to explain the relationship between fossil-fuel emission and global temperature. The only predictions that have been made are apocalyptic, so the hypothesis has to be accepted before it can be tested.
. . . . .
...the acceptance of man-made global warming as scientific fact has become so prevalent that the secretary-general of the United Nations, Ban Ki-Moon, recently declared: “The debate is over. It’s time to discuss solutions.” Leaving aside the question of the secretary-general’s qualifications that is certainly one of the most anti-scientific statements ever made. The first question that this raises is why have so many scientists chosen to ignore this glaring failure of the global warming hypothesis to meet the standards of their own profession? The second question is what, if anything, can be done about it?
. . . . .
...global-warming alarmists have amassed a large group of journalists and politicians ready to silence any critics and endorse whatever boondoggle scheme is prescribed as the cure to our impending climate catastrophe.
. . . . . . . . . .
If you have interest in this topic, you may read the article by 'clicking here' - - - - - - - - - - - - - - -
Posted by uncle jim at 1:35 PM

Sir Thomas Eddington? Try Sir Arthur Eddington. I'm not ready yet to let my natural scepticism allow me to be browbeaten by a refrigerator salesman who can't get his facts right.