stories, ideas, truths, fictions - what do you think?

Life has a way of making that new and exciting thing old and dull. That's the way it was for the owner of the company for which I worked. Even a slot-machine in his office had become an object of foolishness, apparently. I'm not sure whether it was because people just got used to seeing it in his office, or if it was because, as he put it, "The damn thing doesn't work right!"

That's what he told me one day when I had been summoned to his office; "The damn thing doesn't work right!" I wasn't sure if he was blaming me, or looking for help. The natural follow up on my part was to inquire as to the nature of the problem ... and this is what he told me; "It pays off too often - the darn thing makes winners out of just about everyone who comes in here."

"I thought this was supposed to be an amusement, a novelty, a mindless distraction," I commented. His response was, "Well, it is, but I certainly didn't expect it to cost me money to have it here for the amusement of the people who come in here to see me."

I could hardly believe my ears. He was a successful business man. He owned a couple of thoroughbred race horses. He had a home in the Keys of Florida. Here he was complaining because this slot-machine he wanted - and I helped him obtain - was paying out too much money.

"Look," he said, "do you know anyone who can help me? Can you find someone who can 'fix' this thing so it pays off less often?"

You guessed it. I called my old friend Tony.

Like the original trip to Detroit to deliver the machine, I arranged for Tony to come into town on a Saturday eve. He stayed at our house, again, then bright and early Sunday morning we headed into the office. The owner had given me a key to his office and a key to one of the conference rooms - the conference room was to become our surgical center.

I was surprised [actually I was naive] to find out that the pay out could be controlled - that a system of weights and levers could control the frequency and amount of 'wins'. With surgical precision, Tony opened up his patient on the conference room table.

He then began to make adjustments that control the rate of 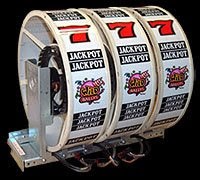 spin of the series of wheels that display the various symbols in the front windows of the machine. He then adjusted the duration of spin, and the 'random' [actually more like the 'fixed'] nature of the likelihood that the same symbols could be displayed at the same time.

Sunday in the executive wing of the company headquarters should be a very quiet time of the week. So why was I hearing voices out there somewhere down the hall? Go figure.

I motioned to Tony to keep still and be quiet. I slipped over to the door and pressed the 'lock' button. At least whoever it was wouldn't be able to get into the room - they'd need a key. As the voices got closer, I recognized one of them - it was the owner. It was apparent from the conversation I could hear, that he was giving someone [out-of-town friends, I later learned] a tour of his company office. He was the owner - that was his prerogative - and, of course, he had a key.

We stood motionless as we heard him try the door. The next thing we heard was a key being inserted into the door lock. As he opened the door, ready to show off the conference room to his friends, he - and they - saw us ... and the slot-machine that was partially disassembled on the table.

Waiting to be addressed, and not knowing for sure how I was going to respond, I was caught off guard [so what is new about that?] when the owner commented to his friends as he backed out of the room and was closing the door, "This is our payroll department. They're not usually in here on Sunday."

I heard the voices proceed down the hallway, laughing as they departed. Tony went back to work.
. . . . .
Tony returned to Chicago that evening. All I had to do was to show up to work on Monday morning and see what the owner thought about, not only the episode on Sunday, but about the now re-adjusted machine in his office.

True to form, I was in my office Monday morning when I heard the familiar call - "Jimmy - come down here - NOW!" Once past the nosy secretaries outside his office, I knew I'd find out quickly where things stood. You remember that feather he knocked me over with once before? Well, he had another one. He apologized for barging into the conference room - he just plain forgot we'd be in there.
. . . . .
Now, only time would tell how well Tony had done his job. It didn't take much time. By the end of the week, the owner was commenting that it had only paid off once that week, and that was after 15 or 20 people had dropped quarters into it. 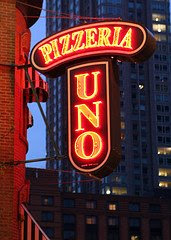 It was probably two or three years until I next saw Tony. We, my wife and I, were in Chicago visiting some of her relatives that particular summer. For old times sake, I got hold of Tony and arranged for us to meet for lunch at our favorite Chicago-style pizza & beer parlor.

It was a very friendly and congenial visit. My wife and Tony got along great when he stayed at our house on those two occasions. That lunch meeting was no different. Tony could be very charming when he tried.

Another thing that was no different was that Tony had another surprise for me, or should I say 'us'. He had his regular spate of stories - and one that stopped us cold. It was almost enough to make me choke on my beer.

Tony was now married...to a nice little Italian girl...a Catholic Italian girl...and they had a little girl baby. He had changed his ways, he said. He was concentrating on his food vending business and was getting away from all that other stuff - he was going to church, too. He thought it was time to settle down and get away from his wild and dangerous ways.

What a change. It almost seemed unnatural - like another story...and who knows for sure, maybe it was just another story. But he did offer me a piece of information that might have made the rest of it make more sense. As we were saying our goodbyes, and preparing to depart, my wife said she needed to go to the rest-room.

Second Chances - great way to start off the Year of St. Paul! That's a story of second chances!

Regarding epistemology...it's all a figment of my imagination! ... or is it??? LOL

wow - what a coincidence re today being about second chances like St Paul's conversion ... AND Tony's tale

i think you are

This was one of your best "Tony" stories!!!

the last part, about Tony's 'life change', was the main point of the whole series - i just wanted to paint as complete a picture as i could of his life before the change.

Jim, I have enjoyed the "Tony" stories, especially this last one!