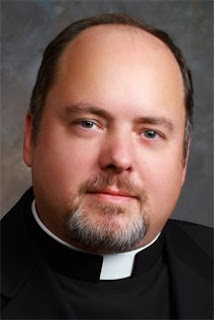 Seminarian Deacon Dennis Schenkel will be ordained a priest for the Diocese of Memphis on June 7. The following is an article written by Schenkel describing his journey to the priesthood.
. . . . .
Though I waited until my mid-thirties to begin seminary, on some level I have known my whole life that I should become a priest. My own experience of being around priests who were good, holy men, in love with Jesus Christ, led me to see priesthood as a special role in the life of the Church.
The priests I knew growing up were excited about the Gospel. They brought us the sacraments, and they were good, trustworthy advisers. While priests do not marry or start their own families, they are part of every family.

My wife, Aunt Rozann, and I will travel to Memphis for the events next weekend.

On May 22, 2008, a new era began in the history of what is called the Religious Right. Republican presidential candidate Sen. John McCain rejected the endorsements of two of the leading Evangelical pastors in the United States, Rev. John Hagee and Rev. Rod Parsley.

. . . . .
In my recent book Onward, Christian Soldiers: The Growing Political Power of Catholics and Evangelicals in the United States, I wrote a final chapter titled, "Can the Democrats Get Religion, Can the Republicans Keep It?"
. . . . .
The new emphasis on discussing personal faith among Democrats appears to be working.
. . . . .
Among Republicans, the move of religious conservatives to the campaign fringe has come about for two reasons, one intentional, the other accidental.
. . . . .
The expectation remained, however, that through an effective faith outreach, the McCain campaign would bring reluctant religious conservatives into the fold.
. . . . .
Then the unforeseen happened: Hagee, the mega-church pastor from San Antonio, was charged with anti-Catholic statements by Bill Donohue, president of the Catholic League for Religious and Civil Rights.
. . . . .
The unexpected apology by Pastor Hagee to Donohue, and their subsequent warm meeting in New York City, appeared to have put the controversy to rest.
. . . . .

"Obviously, I find these remarks and others deeply offensive and indefensible, and I repudiate them."
. . . . .
Hagee tried to beat McCain to the punch by withdrawing his endorsement.
. . . . .
Controversial statements from leaders of the Religious Right are not new -- Pat Robertson, Jerry Falwell, and James Dobson all committed their share.
. . . . .
There will surely be those who applaud McCain for distancing himself from the "fanatics" on the Religious Right.
. . . . .

Ronald Reagan won Evangelical support with a now-famous line at a 1980 National Affairs Briefing held in Dallas: "I understand that you can't endorse me, but I'm here to endorse you."
. . . . .
The unanswered question raised by McCain's words on May 22 is whether he will be viewed by Evangelicals as explicitly reversing Reagan's endorsement.
. . . . .
Within the past two months, McCain has unintentionally aggravated both Evangelicals and Catholics.
. . . . .
As things stand, I believe Catholics are still in play for McCain, if his campaign conducts a vigorous outreach.
. . . . .
And this is no small thing: McCain will need religiously active voters over the next five months.
. . . . .

Deacon Dennis - we will be praying for you! What an awesome journey you are on!

We will be praying for all of you!
LM

Uncle Jim - DON'T forget to take your camera!!! I expect tons of pictures.

Tell him he's got more prayers coming to him from Cleveland!