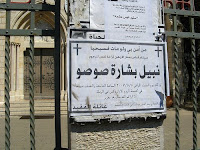 Latin Patriarch’s Easter Homily: Security Cannot Be Achieved by Inflicting Insecurity on Others

“For the people and for all our political leaders, the situation has become deadlocked, or still worse, a routine of death that the latter think they must only govern without ever giving it life. The recent events of these past few weeks, Gaza, the murder at the yeshiva in Jerusalem, the young people killed in Bethlehem, and many others, are no more than sterile repetitions of the events of all the past years. And we will not stop repeating that security cannot be achieved by inflicting insecurity on others. New means must be found…” [Read the Article]
- - - - - - - - - - - - - - -


by Kevin Cullen
The Catholic Moment

WEST LAFAYETTE — Pope Benedict XVI is speaking out about global warming … the Vatican is “going green” … and U.S. Catholics are being urged to do more to protect God’s fragile gift of life on earth.

A panel of experts provided ideas on how to recycle, cut energy costs and reduce pollution at the third of three “Climate Change 101” presentations, held at St. Thomas Aquinas Catholic Center on the Purdue University campus April 16.