An apple - An elementary school teacher once used an apple to try and explain the mystery: a) skin; b) fruit; c) core. The same problem arose as with the three-leafed clover. If you remove one element, you no longer have an apple

Marriage and 'Doublemint' gum - I once used this to try and explain something similar, though consisting of two elements. Wrigley's 'Doublemint' gum was flavored with the essence of two different mints. The essence of two mints is factual - BUT when blended together they become a new flavor; the original two elements can no longer be distinguished. In marriage, we have two elements - a husband and a wife. The two do create a new entity - a oneness takes place ["...and the two shall become one flesh"], YET their individual essences are still distinguishable ... like the three elements of the Godhead, the Trinity.

A hologram. This may not be very well understood except by those who have experienced the phenomena. If you place a photo on a stand in front of you, and take a piece of paper, punch a hole in the paper, then view the photo on the stand through the hole you punch in the paper, you will only see that part of the picture that is visible through the hole - the portion visible will vary in completeness based on the size of the hole and the distance it is held from the eye. If you place a hologram in front of you and view it in the same manner, you will see the entire hologram and not a portion of it. Much more like the Trinity - we see the whole thing and not just one element or portion of it. [ask a physicist]

I have heard all of the above used as simplified means to try to explain the reality of the sacred concept of the Trinity. While I still find it something of a mystery, I accept and experience it by faith. 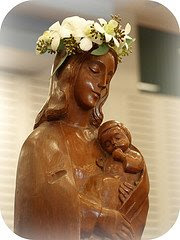 rtunity for the students to honor the Blessed Virgin Mary during the month of Mary - May. One female student is selected to place a crown of flowers on one of the several prominent statues of Mary on the school and parish campus - the parish is, after all, St. Mary Parish and St. Mary School - her likeness is prominent. Songs dedicated to Mary are sung, and the Rosary is recited. Many parents and parishioners attend - it is a long-standing tradition.

This morning, the Religious Education Program for public school students held a May Crowning of their own. These students are significantly less in tune with the traditions surrounding Mary. They come to class for one hour a week, 25 times a year. The parish school children get taught daily on 181 days of the year.

The school has paid staff, albeit for minimal wages.. The Religious Ed program is served by volunteers [there is one paid Coordinator of Religious Formation on the Parish staff - she oversees this and many other Religious Formation activities for both adults and children]. I've been one of those volunteers for probably 20 years plus. I really commend those serving in this capacity.

This morning, as the current Coordinator concluded the ceremony, a parent in the gathering stood and publicly solicited a round of applause as a show of appreciation for this woman's efforts in the Religious Formation of the children, and the Parish - two weeks ago she announced her departure from the role of Coordinator of Religious Formation in our Parish. I don't know what she will be doing to serve the Lord next, but it will take a very big heart to replace her heart. She always gave it her all.

And with that, I appreciated all the more all those who work so tirelessly serving our parishes in all the many volunteer service capacities that exist. It is all part of our application of and our understanding of stewardship in the church.

Some of my favorite Catholic school memories are of May Crownings (do they still sing "Bring Flowers of the Fairest" and "Tis the Month of Our Mother"?) I guess one the reasons I liked May processions was because we got out of class to practice.
And I agree, we too often take those who volunteer to teach relious ed for granted.

Melody,
Not sure which songs were used in the school's ceremony, but, while "Bring Flowers of the Fairest" was also one of my favorites, it was not used at the Religious Ed event this year. Gotta love the way we continue to teach the kids about honoring Mary. I hope some of them 'get it' somewhere along the way.