from Father Valenchek at Adam's Ale
posted on Sunday 12/16/07
REW sends news of a new Vatican Web Site to help people in their reading of Scripture. Thanks! This program offers Sacred Scripture, its interpretation in light of Sacred Tradition and the teachings of the Magisterium, with appropriate theological commentary and exegesis. It can be very useful to anyone wanting more resources.
. . . . .
From Adoro Te Devote's post on Thursday December 13, 2007
O Come O Come Emmanuel... Today I attended an "Advent Day of Reflection" designed for we who work in parishes, and found it to be very refreshing and enlightening. It was exactly what I needed, although it was actually at Mass that I had my "special moment". And because it was a retreat, the moment was allowed to continue.

The communion meditation was "O Come O Come Emmanuel", and, never before had I so clearly understood the hymn. Never again will I hear it the same way. [read entire post]
. . . . .
from the Dawn Patrol
Saturday, December 15, 2007
Quote of the day

"In 50 years, the sexual pendulum in Britain has swung from one extreme to the other, from an era in which nice girls didn't until after they were married, to one in which teenage abortions are drearily routine and the Government - like some deranged hippy mum - is wheedling 14-year-olds to please 'be responsible' and go on the Pill.

"The 1950s philosophy was pinned in place by shame, and a reluctance to discuss sex at all. There were dark whispers around unmarried mothers, and desperate panic in single women who fell pregnant. There were hushed-up backstreet abortions, and hurried adoptions, and the cruel denial of children born out of wedlock for decades to come.

"I have no desire to go back to those days, but it seems to me that young people now are being fed an even more complicated set of lies."

from Abbey-Roads [aka: Terry Nelson] 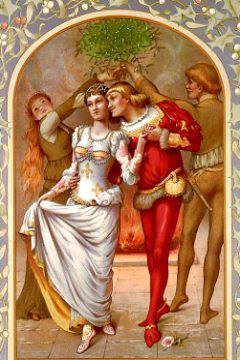 Mistletoe
The use of mistletoe dates back to pagan times of course, just as the Christmas tree, advent wreaths, and the use of other greenery does. It is actually a hemiparasite plant that grows upon tree trunks. It was once considered an aphrodisiac by the ancients and associated with fertility by the ancient Celts and Germans. The idea of kissing under the mistletoe originated with Saturnalia, the ancient pagan feast, and later extended into pagan marriage rites.
Before the invention of toilet seats, many young girls claimed to have become pregnant after having kissed a boy under the extremely potent mistletoe. However, this notion died out when young maidens realized they could get pregnant simply by sitting on toilet seats.
. . . . .

from Father Schnippel at Called by name

Just in time for the Christmas turnout:

There were four country churches in a small Texas town: The Presbyterian Church, the Baptist Church, the Methodist Church and the Catholic Church. Each church was overrun with pesky squirrels.

One day, the Presbyterian Church called a meeting to decide what to do about the squirrels. After much prayer and consideration they determined that the squirrels were predestined to be there and they shouldn't interfere with God's divine will.

The Methodist Church got together and decided that they were not in a position to harm any of God's creation. So, they humanely trapped the Squirrels and set them free a few miles outside of town. Three days later, the squirrels were back.

But -- The Catholic Church came up with the best and most effective solution. They baptized the squirrels and registered them as members of the church. Now they only see them on Christmas and Easter.

and this, from Adrienne at Adrienne's Catholic Corner

Discernment simply means that we exhibit sound insight and good judgment. We tend to be good at this when it comes to everyday objects or occurrences. If we don’t like a certain food, for instance, we don’t eat it. If we are cold, we put on a sweater.

Yet, when it comes to our immortal soul, we often exhibit far less care. We live in an age of information overload. If you are reading this, you have probably already checked out the number of Catholic websites, blogs, and news agencies. Some of them are a source of great wisdom and some are a scandalous barrage of nonsense. [read complete post]

:
by Steven Ertelt
LifeNews.com Editor
December 9, 2007
New York, NY (LifeNews.com) -- University of Florida quarterback Tim Tebow became the first sophomore in the history of the NCAA to win the coveted Heisman Trophy as the best football player in the nation. However, Tebow's accomplishments may never have been supported had his mother followed a doctor's recommendation to have an abortion. [read post]