blessed be the Lord's Day

...out one side door and into the next 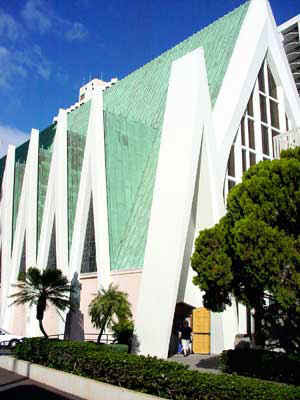 St. Augustine By-the-sea Roman Catholic Church
- Waikiki Beach, HI -
. . . . .
[in the extreme upper right corner of the picture you can see the form of 5 or 6 balconies on the hotel - that is how close we were.]
. . . . .
The celebrant was a native Hawi'ian priest ... at least he sure looked like it - and then he opened his mouth and spoke ... his accent was NOT Hawai'ian. Now, he did have native relatives on the island and that is why he was there - he was on vacation visiting relatives. His home parish, he told us, was an African-American parish in Oakland CA. There were a lot of vacationers in the church that morning, besides him.

As a note of some interest to some, Sen. Barach Obama was also on the island all week on vacation with his family and visiting relatives - and causing an uproar wherever he went. He visited old friends, and the High School he attended, and lots of other 'photo-op' locations - and he played golf several times. The rest of us went about our own agendas.

After Mass we went back across the street to our piece of Paradise and found our way the the big breakfast buffet at the hotel. Let me tell you, I've not seen a bigger spread than this. And because of the high percentage of Japanese visitors to the island, there was ample opportunity to try foods we don't see on our table at home ... at least Rozann tried some ... I stuck to bacon and eggs and pancakes and waffles and fruit and juice and coffee and pastry and ham and fried potatoes and sausage and cereals and...

The doors opened at 5am each morning. We were there bright and early every morning of our stay, between 5-6:30am, except that first day we went to Mass first. Then we could get a good and timely start on our day.

People of Praise, an ecumenical charismatic covenant community with 22

branches in North America, has a branch in Kailua, on the eastern windward side of the island. We are members of a People of Praise branch in our hometown - Muncie, IN. At 2:30pm they were scheduled to have a weekly branch meeting which includes prayer and singing and sharings and fellowship. We were going to be there and meet some new people ... and see some others whom we already knew. It was a wonderful way to spend a Lord's Day afternoon.

After the meeting, we went to dinner with several of the local members. By the time we ate and talked and drank and talked, it was time for us to head back to our south side of the island location before darkness set in.

As we were still somewhat sleep deprived from the trip over, we went directly to the hotel. We ordered up a 'pay-per-view' movie and watched the latest Indiana Jones outing. I think we both fell to sleep while it played. 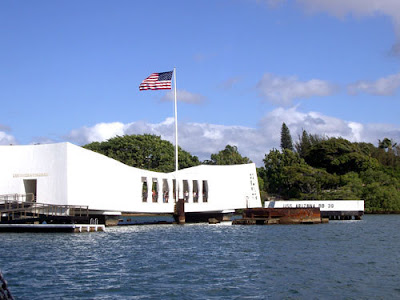 I'm enjoying your vacation almost as much as you did.

i feel somewhat ambivalent about this 'slide show with narrative' of our family vacation.

how many times have i dreaded setting through someone else's.

bonus here is you can take it or leave it - no judgement.

Now that you went, well, I have to go, too! Sounds too good to pass up.

And that Church could not have been in a more convenient location.