the inevitability of things not going according to plan 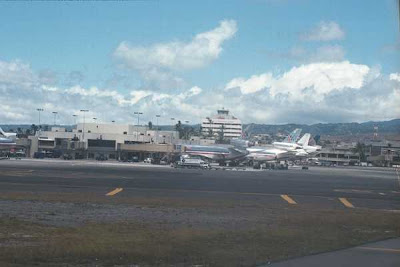 ...and then God said

Landing in Honolulu was quite exciting.

Second, it confirmed that the 'Garden of Eden' [aka: Paradise] was not created anywhere near the Tigris or Euphrates rivers - it was on an Island in the middle of the Pacific Ocean.

The light puffy clouds, the sunny bright-blue sky, the multi-shades-of-blue color of the surrounding waters, the palm trees, the beautiful green of the plant-life on the sides of the great volcanic mountains, the sandy beaches, the dark-tanned complexion of inhabitants, the seemingly genuine greetings from all whom we encountered ... "ALOHA", and the sincere "Mahalo" affirming their gratitude for our being there - all of this testifying to the surreal sense of being in paradise.

But, of course, just when we had assured ourselves that all was wonderful, then we had to deal with the real world ... again.
. . . . .
We found our way out from the air-line's terminal to the 'Rental Car' bus-stop. Once on board the bus for our rental car company, we were ready to take on renown traffic congestion from the Airport [west of Honolulu] to the Waikiki Beach area [east of Honolulu]. All our arrangements for this trip had been made last March - plenty of time for anyone involved to have things ready for our arrival ... or not.

We knew gasoline prices on the mainland were high ... and we had been told in advance that prices for everything in Hawai'i would be higher - significantly higher. Trying to respond defensively, we had reserved an 'economy-class' car to drive while we were on the Island.

Apparently, so had everyone else who had arrived before us that day. None were available.

Upgrade? Would we be interested in an upgrade? Sounded like the old 'bait and switch' to me. "How much extra?", I asked.

"Extra? Why would you think that?", she responded. "There will be no extra charge. We don't have the vehicle your requested. The upgrade is 'on us'. No extra charge."

Paradise? Maybe we were there after all. My mainland cynicism had gotten me ahead of the reality. Of course we'd be glad to accept an upgrade. "What kind of vehicles would be available?", I asked. "How about a 4-wheel drive Jeep Wrangler - get you off-road onto the more secluded beaches and sites?" 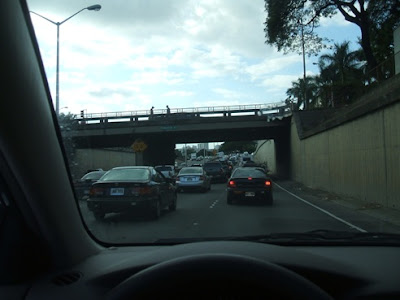 It was still daylight when we arrived at our hotel - the luxurious Waikiki Beach Marriott Resort and Spa. It truly lived up to the reputation we expected. When we planned this trip, this is exactly what I was sure we'd never be able to afford - but we did it any ways.

After all, we were celebrating our never-before-taken honeymoon, our 25th wedding anniversary, and our current anniversary on Wednesday the 13th. This was absolutely the ideal. 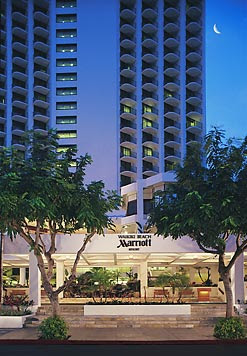 I pulled up into the Arrival entry lane and was faced with my second major decision [the vehicle upgrade was the first] - to 'self-park' or to 'valet park' or to find a lot or garage a couple of blocks away for much less of a daily fee [maybe]. Being the big spender that I had already exhibited with renting a gas-guzzling Jeep, I ventured into the world of 'Valet' parking ... at least for the first night.

Marriott situated this resort directly across the street from the eastern end of Waikiki Beach on 5.2 acres of luxuriously landscaped and manicured grounds. The rooms were in two separate towers - one with 25 floors and the other with 33 floors ... and all the rooms had balconies with beautiful views.

Check in went flawlessly. Our room was almost beyond expectations. The view from our room on the 26th floor was mind-numbing. And our stomachs wanted to visit Paradise - one block away was a 'Cheeseburger-in-Paradise' restaurant. Off we went in search of the perfect bed-time snack. It was 9:30pm in Honolulu [3:30am in Indianapolis] when we returned to our room and fell into bed.

Jim, I am enjoying the pictures and the story of your trip. Thanks for sharing. What was your favorite place you saw on your visit?

several of equal rank, and all for different reasons

2 - tropical rain forest: have never seen trees and plant-life like that before ... will say more in a later post ... and the waterfall at the end of that trail

3 - people: of every race and shade and nation ... almost a Biblical rendering of God's children

4 - beaches: some full of 'beautiful' people [in the heavily touristy areas], and some full of homeless people [mostly along the west / lee side of the island] seeking shelter under bamboo poles and plastics sheets & tarps

more to say about most later