“To us, the rings are a constant reminder to live a life of values. It’s about being a gentleman, treating people with respect and being the best guys we can be.”

- Dancing With the Stars champion Julianne Hough (19 year-old Mormon) answering if she is a virgin, CosmoGirl, April 2008, p. 106.

“Yes. I want to be with that special person. I think the decision to have sex before marriage is an individual one, but if you’re just with one person, it’s only for one good reason, and (waiting to have sex) will strengthen the relationship. I’m not trying to preach consequences here, but I think when you say no, down the line it will be a better decision.

the following is excerpted from a post on Abbey-Roads2

Some thoughts on humility
posted by Terry Nelson July 31, 2008

“The first kind of humility is this: This is the kind that is necessary for my eternal salvation, and consists in subjecting and humbling myself so that I can obey the law of God…” 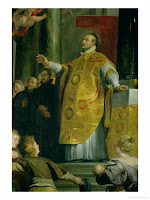 Ignatius briefly explains this as being a determination to avoid mortal sin - to keep the commandments of God, and by extension, the Church. [more]

“The second kind of humility: The second is more perfect than the first. I have it if I find myself at a point where I do not desire, nor even prefer, to be rich rather than poor, to seek fame rather than disgrace…provided it is the same for the service of God and the good of my soul…” Ignatius continues his instruction with the attitude the soul must have of avoiding even deliberate venial sin, no matter the cost, even one’s life. [more]
. . . . .


“The third kind of humility: This is the more perfect humility. It is present when - given the first and second kinds are included, and supposing equal praise and glory of the divine majesty - in order to imitate Christ our Lord and to be actually more like him, I want to choose poverty with Christ poor rather than wealth, ignominy with Christ rather than fame, and I desire more to be thought a fool and an idiot for Christ, who first was considered such, rather than to be thought wise and prudent in this world.”