ne'er the twain shall meet 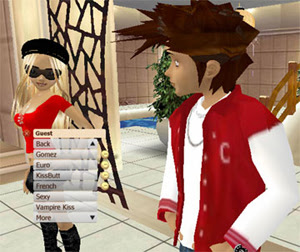 And what's on the menu for today? Hmmmmm. Should I pick up on some girls, get a virtual lap dance, or meet a stranger and give them a cyber French kiss... all in 3-D! (yes, you can actually select "French" from the menu of "flirt" actions)

It's called IMVU.com, and millions of teens are navigating through "rooms" making friends... and making out. It's little wonder that the site has registered 20 million users, most of which are American teenagers.

The Newest Online Hangout
Although it sounds a lot like it, IMVU is not just another virtual world. The company actually bills their site as the "world's greatest 3-D Instant Message server." If that sounds a little arrogant to you, just know they have very good reasons for making that claim.

IMVU encourages their users to "be the person you want to be" ... a tempting offer for teenagers who "represent" themselves online.

Users express themselves by creating a personal, three dimensional character, known as an avatar, that can chat and interact with any other user from around the world. The options for customization are almost endless. Users can purchase a wide variety of virtual products including clothes, accessories, whole rooms, and even pets, using very real credit cards.

I investigated the site myself. Signing up was easy and I was able to create my very own "avatar," a virtual representation of myself. Okay, okay... it doesn't look anything like me at all! But I can see why teenagers like this site so much; there's no option for "overweight," "acne," or "straight-up goofy looking!" (You should see me...I'm a stud!)

The avatars are almost always depicted as very attractive teenagers, (regardless of the user's real age), and the graphics used by the designers give the avatars a very realistic appearance. Their body language can show emotions that range from interest, to confusion, to happiness, to boredom, and can even give that "come hither" look.

That look comes in handy for the female versions of the avatars who are dressed in incredibly sexy outfits. It's a rarity to find a room without at least one "girl" walking around wearing a skimpy two piece of some sort. Designers have also given the avatars the ability to perform physical acts with one another, including flirting, dancing, kissing, and massaging. (On my very first visit, a female avatar approached mine, said hello, and then mounted me on the couch and kissed me.")

Defining chastity was a prominent issue of two religious youth conferences earlier this month, one for Catholics in Boca Raton and another for Mormons in Miramar. Although church and school leaders say they have become more explicit in their teachings, 70 percent of 14- to 19-year-olds still don't consider oral sex to be sex, according to a 2007 study in the Journal of Adolescent Health.

Flavio DaCosta, 14, of Boca Raton, is among them: "I know you can still pass on STDs, but there's less of a chance, and no chance of getting pregnant."

To 15-year-old Jenni, a Coral Springs resident who didn't want her surname published, there is no controversy. "It's not intercourse, so I don't consider that losing your virginity," she said.

Today, I want to introduce to you Fr. Dennis Schenkel, a priest of the Diocese of Memphis who was ordained only a week ago. Fr. Dennis is here today because this is the parish where he was baptized.

Now, many of you may know the legend that has been in this parish for many many years, that back in the earliest days of this parish, one of the pioneer Jesuit fathers who worked here was mistreated by the parishioners, and in

response he placed a curse on this parish that we would never have a vocation to the priesthood.

Today, Fr. Dennis has broken the curse because he’s the first priest from this parish in the 185 year history of All Saints! Thank you, Fr. Dennis!

As you said, "Way to go Fr. Dennis"!
As for the avatar thing, I find it way too weird. But I guess since I'm a grandma now, I can be a fuddy-duddy. I had thought that friends of ours who discontinued their internet service because of concerns about what their teens might run into were being a little too reactive. But maybe they were just being pro-active; who really needs that kind of stuff?

Regarding the IMVU website. I sent this to a co-worker of mine who created her own avatar to see how everything works. She found out some of her relatives (30+ yrs) were in there. Now, whether they were trying it out like she was, she was unsure, but now she needs to ask. Luckily her children were not listed. She was as appalled as I was at the site.