'CLICK ON' the above > and see if you recognize anyone

Eighteen months ago, Luke Pittard, 25, was working in a McDonald's fast-food eatery in Cardiff, the capital city of Wales. Then he won $2.7 million in a lottery. Today, Pittard is working in the same Mickey D's, now as a staff trainer. 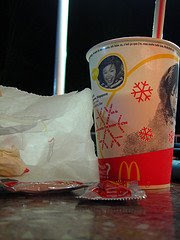 It's not that Pittard needs the wages -- he earns more each week from interest on his winnings than he does at his job -- but he's realized that he is happier working.

Pittard and his partner Emma Cox were both employed at the same McDonald's when he hit it big on the lottery. They quit their jobs, got married, took a great vacation and settled down in a half-million dollar home with their daughter Chloe, 3.

But after 18 months, Pittard asked for his old job back. He explained his move, saying "To be honest, there's only so much relaxing you can do. I'm only young and a bit of hard work never did anyone any harm."

More on this story may be found at these links:

1. Is working a source of meaning in life? If yes, in what way? If no, what role does work play in life?

2. If you have enough money that you do not have to work, how should you spend your time?

3. Christianity is sometimes viewed as supporting a work ethic. Can a person who refuses to work be a good Christian? Explain your answer.

4. For a Christian, can any legal job be a ministry? Why or why not?

5. Can a person who puts work above all else be a faithful Christian? Why or why not?

what's the Church got to do with it?

by Maureen Martin* [see footnote for more on author]

Catholic Bookstore Staffer Puts Kibosh on Magisterium Teaching
GULFPORT, MS -- Catholics are now free to join their local Masonic Lodge without fear of excommunication or eternal damnation, according to Meg Dupre, a part-time staffer at Our Lady's Catholic Bookstore on Kent Street in Gulfport, Mississippi.
"I was in the bookstore, telling my brother-in-law that he couldn't be a member of the Masons and still be a faithful Catholic, when the cashier walked up and told me that I was wrong," said Cheryl Wilkinson, a manager at Pizza Inn in Pascagoula. "At first I felt really irritated, but she just spoke with such authority, I knew she was right." [ more here ]
. . . . .

Priest with Annulment Charism Starts Lay Movement
SAN ANTONIO -- A priest who claims he has been gifted with the charism of annulment has created a lay movement to help Catholics answer the call to invalidate marriages.
Rev. George Finnegan of St. Thomas More Catholic Church in San Antonio said he got the call to start the movement, which he has named Annulitas, after several couples he counseled began having severe marriage problems and divorced. "I took that as a sign that I could be used as a tool for something," Finnegan said. 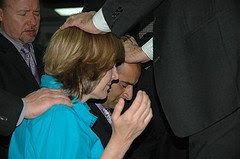 Soon after, Finnegan began holding Annulment Prayer Meetings for couples who were having marital problems. "It was amazing," said Patti Bishop of the prayer meeting she attended in Dallas. "Father cupped his hands over my forehead and my husband's forehead and yelled, 'Annulment!' We both fell on the floor and not a year later, our marriage was declared invalid." [ more here ]

. . . . .
Catholics Already Incensed at the Church Being in Their Bedrooms Discover Church in Additional Rooms
SCRANTON, NJ -- Thousands of Catholics across the country who have been angry about the Church being in their bedrooms were shocked to learn recently that the Church has infiltrated other rooms of their homes as well.
"First the Church was in my bedroom, and now the Church appears to have sneaked its way into my living room," said Guy McNeal, a parishioner at Our Lady of Good Counsel in Scranton. "Last night, my friend Bill and I were watching movies on the DVD player in my living room, when he flipped over the remote control and said, '"Made in China"? Don't you care what the Church has said about the human-rights abuses going on there? I never buy anything made in China anymore.'" [ more here ]
. . . . .

1. Working is certainly a source of meaning in life. MAybe not the only one, but it is one. I know I'm using my talents well, and I'm making a visible difference in the lives of children in a very important way. I don't mean to be arrogant, I'm certainly not an experienced teacher, but the special education teaching field in general is crucial.

2. If I had more money than God, I'd probably do something else constructive with my time. I'd get bored and get into trouble if I didn't. I don't think there's any hard and fast rule about what you need to do.

3. You don't HAVE to work if you don't need to. But if you need to, especially to provide income for your family, then I think you need to get priorities in order and work because God wants us to take care of our families.

4. I think any job can, but some may choose not to, and might not lend themselves to talking about God, at least while on the clock. I choose not to spread my faith through my job directly. Public schools are not the place to talk about religion. I could lose my job or get sued and I'd rather be teaching my kids than anything else. I'd never lie about it, but make it a point not to do anything that resembles telling kids that thats the only way to believe while I'm still standing up holding the chalk.

5. Nothing should go above faith.

i especially agree with your comment
"I don't mean to be arrogant, I'm certainly not an experienced teacher, but the special education teaching field in general is crucial."

you're going to be great in that field.

Regarding Maureen Martin articles -
What's sad is that some people will read these & think it's TRUE...totally missing the satire...and the fact it was published on April Fool's day. :-)

(glad to have you back, Uncle Jim!)