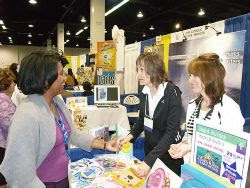 Adoro Te Devote has an interesting post yesterday April 21, 2008
. . . . .
Synthetic Connections Many moons ago, back in the summer between high school and college, back when I was focused on a future career in law enforcement, I went on several ride alongs with the City police department and the Deputies. And I usually rode with one Deputy in particular for I knew he and his family well.
[ continue by clicking here ]
- - - - - - - - - - - - - - -


Rather than condemning The Vagina Monologues
the Church should be listening to what it is telling us
. . . . .

“The split between the Gospel and culture is without a doubt the drama of our time,” wrote Pope Paul VI in 1975. Occasionally I am reminded of this “drama” when some Catholic group boycotts something. But nothing makes me more aware of how deep this split is than the debate over the performance of The Vagina Monologues on Catholic college campuses.

Sr. Bernadette is illogical and is essentially saying, "the end justifies the means." NO. IT. DOESN'T.

Would any other soft-porn serve as well?

I went back and read the article. Sister Bernadette seems to be making the point that we should be trying to understand, and reach out to, women who have been victimized and exploited sexually. I would agree with that. What I don't agree with, is the idea that "The Vagina Monologues", which seems to reduce women to a sexual organ, is the catalyst to make this happen. From an artistic point of view, can't we do better that this vulgar and offensive rant?

Off topic: Doing a meme. Tagging you. See it here.

below is an e-mail i received regarding the V Monologues article. the person who sent it to me is middle aged and recently widowed.
the e-mail is used here with her permission.

.......................
I read the article about the Vagina Monologues. And I have to say that I understand what the author is saying. Although I have not read or seen the play I have read about it and have always felt there was something more to it than a dirty play. I was married to a man who who was sexually abused as a child. It profoundly affects who you are down to your core. We like to think everyone has beautiful sexual experiences in life, but like all things we humans create something ugly out of it and it needs to be acknowledged. Yet our society despite all the "programs" tends to sweep it under the rug. We are to be a people of hope and healing to each other. Yet often we are a people of condemation.

I am currently going to a grief group. I find that just by telling our stories we find out we are not alone. That we are not the only one who is experiencing what I am experiencing. I suspect many people who go to the play feel that same way. There is some comfort and strength in that. If you survived, then maybe I can to.
DH
......................

thanks for writing your thoughts, DH