when the saints go marching in

A milestone is reached in the sainthood cause for Fulton Sheen

A key moment in the canonization process of Fulton Sheen is drawing to a close, as Clerical Whispers notes:

A milestone in the cause for sainthood of El Paso native Archbishop Fulton Sheen comes Sunday, with a special mass of thanksgiving at 10:30 a.m. at the Cathedral of Saint Mary of the Immaculate Conception, Peoria.

It is part the “postrema session,” which ends the Peoria Diocese’s role in Sheen’s path to sainthood. During the mass, documents collected over the past few years will be officially packed, sealed and notarized.

Sheen was a diocesan priest who later became famous worldwide as a radio and television personality, author and orator. He died in 1979.

The documentation for sainthood includes about 100 testimonies of 15- to 30 pages each; reviews of each of Sheen’s nearly 70 books from the diocese’s Theological Commission; and about 1,500 pages of historical/archival materials, said Monsignor Richard Soseman, the diocese’s judicial vicar.

Coinciding with this, the Catholic Exchange has an interview with Fr. Andrew Apostoli, who's been involved in the process: 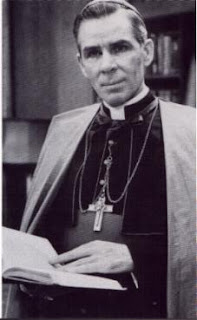 Dave Hartline: Father Apostoli can you give the readers an update on the progress of Archbishop Fulton Sheen's cause for sainthood?

Father Andrew Apostoli: The diocesan phase investigating Archbishop Sheen's Cause for Sainthood began in 2002 and that was started by Bishop Daniel Jenky CSC of Peoria, the boyhood home of Archbishop Sheen. The diocesan phase of the cause is drawing to a close. Through our interviews with witnesses who knew the Archbishop, we are hopeful that we can present testimonies that demonstrate that the Archbishop lived a life of heroic Christian virtue, which is necessary for sainthood. We also believe we have two significant healings that can be attributed to the intercession of Archbishop Sheen. One healing took place in Champaign, Illinois, and the other in Pittsburgh, PA. Both were quite extraordinary. One involved a woman who nearly died from a major tear in her pulmonary artery that occurred during a very delicate operation. Doctors felt there was no hope for the woman to survive, but she did. The other case involved a newborn infant who was diagnosed with three life-threatening conditions, one of which was the worst form of a blood disease called sepsis. There seemed to be little hope and yet the infant miraculously recovered to the point that the child shows no signs of his illnesses. The doctors have been amazed.

Dave Hartline: Father, please explain to the readers who are similar in age to myself (born in the 1960s) and have only seen Bishop Sheen on reruns on ETWN what it was like to see him on television in his heyday. What was the public's reaction?

Father Apostoli: NBC purposely put him on TV opposite Milton Berle. The TV networks had an obligation to show one hour of religious programming each week. Since Milton Berle was so popular (he was actually called "Mr. Television," at the time) no one expected Bishop Sheen's program to do very well. However, after his first show he received some twenty-eight thousand letters. Within six months the number of Bishop Sheen's viewers increased to the point that he beat Milton Berle in the first half hour of the time slot. It was amazing that, percentage-wise, more Jewish people watched the Bishop than Catholics or Protestants.

I believe this point helps to explain how Bishop Sheen was chiefly responsible for helping many Protestants and Jewish people to understand what the Catholic Church was really about. On a radio interview program, a Protestant man shared with me that his family always watched Milton Berle and never Bishop Sheen. One evening, however, when the TV reception that showed Milton Berle was so bad his family looked purely out of curiosity to see what Bishop Sheen was like. He told me that from then on they only watched Bishop Sheen. Another person told me that whenever her grandmother, who was a Protestant, watched Bishop Sheen's TV program, she always wore one of her best dresses. She felt like she was in church.

Dave Hartline: Bishop Sheen had a special devotion to St Therese, the Little Flower. You wrote the forward to a book entitled: "Archbishop Fulton Sheen's St Therese" A Treasured Love Story." It has just been released. Could you elaborate on this?

Father Apostoli: Yes, I was happy to write the forward to this beautiful new book since I knew how much St Therese meant to Archbishop Sheen. I think there were many young men and women who were greatly influenced by the writings and example of St Therese. You must remember that she died at the age of 24. This type of devotion and dedication for someone so young had a great impact on people, among them Archbishop Sheen. This book is special because it was the fruit of Archbishop Sheen's preaching about St Therese in which case you have a saintly person writing about a canonized one.

Dave Hartline: Tell us about why Archbishop Sheen spent an hour in Eucharistic Adoration every day.

Father Andrew Apostoli: While still in the seminary, Fulton Sheen heard about the bold faith of a young Chinese girl who during a time of persecution of the Church in China gave her life for the Eucharist. This young girl made reparation in honor of Jesus in the Blessed Sacrament in a small church in China where the Eucharist had been desecrated by anti-Catholic soldiers. The little girl came back several nights in a row to sneak into the Church. There she spent about an hour in prayer and reparation for the Eucharist that had been desecrated. Each night she licked up a consecrated Host (remember in those days the laity did not receive the Blessed Sacrament with their hands). One night one of the soldiers saw her entering the church, and as she was receiving the last consecrated Host, the guard shot and killed her. Before his ordination Fulton Sheen said that, if this young girl could give her life in reparation for the Eucharist, he could spend at least one hour of each day in prayer before the Blessed Sacrament. We know he kept to this. For example, once while visiting missionaries in a remote village in Africa, he arrived late at night and his first request was to be brought to their chapel so he could spend his hour.

There's much more, so check out the rest. And pray that soon this great Catholic communicator will be officially proclaimed a saint.
. . . . .
from uncle jim

A number of years ago, somewhere between 5-15 years ago, I was leading a Volunteers Workshop in our parish. At the conclusion, there was a final Q & A open floor comment session. The workshop seemed to have been well received by the participants, and I was feeling pretty good about it as I led this final session. A few people commented to that, and stated how glad they were they had participated. One woman, the president of our Parish Pastoral Council, stood up and really went overboard in her praise of the workshop - and of me. I was standing there listening and beginning to feel embarrassed. Our pastor was standing at the rear of the room. I looked back at him and, in an effort to break the tension of my embarrassment, said, "Well, Father, I guess when you get back to the rectory, you can start the paperwork to the Bishop for my 'cause'". I got a few chuckles, which is what I hoped for - but he immediately responded, "I'm sorry, Jim, but I can't do that. You see, you have to be dead first." He got the biggest laugh, and I was able to bring the discussion to a close.

I grew up watching Bishop Sheen on TV - he was awesome and amazing:)

Stop by - we need prayers.

Thanks for this - Good info.

I love Archbishop Sheen, and pray to him often.

And will you also pray for me? Tomorrow and Tuesday night I have to give a talk to the parents of first communicants, and my opening paragraph may be enough to get me martyred.

I'm not holy enough to be a martyr.

max will be there beside you, too.