There were a lot of things that were not right in the unfolding of these vignettes. Like many things, though, you sometimes don't spot them except with hindsight. Then it is usually too late to change things.
- - - - - - - - - -
My new friend, side-kick, and boss [the new Vice President of Sales for the Western Region] was gone about 20 minutes. I waited and had another drink. I didn't know, or suspect, that this would be only the first of many similar meal interruptions. I had the opportunity to eat at many fine establishments over the course of the next 6 months.

"Just had a little business to tend to." That was pretty much the normal reply when he returned to the table. I use the term "reply" although that suggests there was a question; I never asked any questions. I suspected his "reply" was all I needed to know. 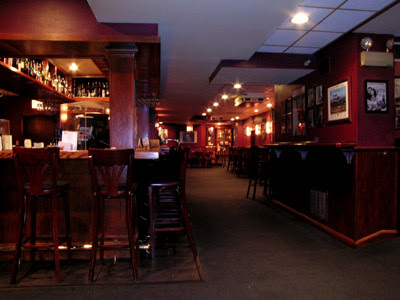 Not all these places had curtains to pass through. Sometimes it was just a table or booth back in a corner someplace out of sight and hearing. Although, I do admit there were a few occasions when loud, agitated voices could be heard ... and while the conversation itself was not understood, the heat of the discussions could be sensed.

There were some occasional meetings where he had "...a little business to tend to" at someplace other than a nice restaurant or bar. Those gave me the opportunity to set and wait in the reception area of several businesses in the Chicago area. I would wait while he met with someone in an office elsewhere on the premise.

d him shouting obscenities and calling him names. As he passed me, on his way out, he motioned for me to follow. The older guy continued his tirade, adding, "Don't you and your goon ever step foot in MY business again."

First time I'd ever been called a 'goon'.

Then there was another time I remember with almost a sense of awe. It was middle afternoon - between the regular lunch hour and dinner-service time. We went to a very modest, but nice, restaurant. It was bright and cheery and well lit - many places we went were dimly lit. I always found those places to be a little difficult to see people clearly, unless you were relatively close to them. I now suspect that was more by design - for reasons that were for other than ambiance only.

He said he had someone to meet and had me set at a table fairly near the entrance. He then went to another vacant table across the room. Apparently his 'client' had not yet arrived. I ordered a drink, and told the waitress I needed to get something from my car, but I'd be right back. I figured that if I was going to be waiting a while, I may as well go through some paper-work in my briefcase.

I left the establishment and headed down a sloped sidewalk to the parking area. Coming from the other direction I encountered a very attractive woman. She was a little taller than average; slender; light-brown hair; lightly tanned; red lipstick which complemented her bright red form fitting knee-length dress; medium height high-heeled shoes; shapely - by almost anyone's standards: very attractive. 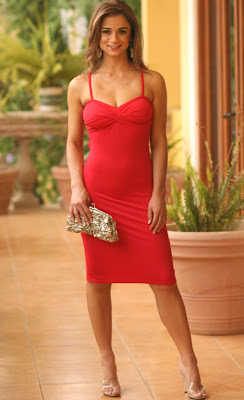 We nodded a quaint 'hello' to each other as we passed.

I retrieved a couple of folders from my briefcase and returned to my table in the restaurant. I looked over at my friend's table to see if his 'client' had yet arrived.

There she was - the lady of my sidewalk encounter - at his table. I almost choked in disbelief.

This gal had people turning heads, and she was seated with my boss, the Vice President of Sales for the Western Region of the company.

I ordered another drink.

I never knew how long these meetings of his were going to last - 20 minutes, an hour? This one was not too long - less than half an hour. I noticed him stand and she rose right after he. They started coming across the room. I was near the entrance, and they'd have to come past me on the way out. I was riding with him, so I was fairly confident that he wasn't leaving without me - at least not for any length of time.

They were along side my table very quickly. They stopped. I stood. He spoke.

You just had to be there to appreciate this moment - I was in a state of shock and awe. I have no recollection of what I might have said - although I probably slobbered as I spoke. He said he'd walk her to her car and then be back in.

I look back at that event and the word that comes to mind is something like:

I can't wait for the next installment....

First of all congratulations on this post. This is really awesome. Great posts that we can sink our teeth into and really go to work.