There were a lot of things that were not right in the unfolding of these vignettes. Like many things, though, you sometimes don't spot them except with hindsight. Then it is usually too late to change things.
- - - - - - - - - -

Time to back-up a little.

I had taken on my new side-kick at about the 2 month mark of the new regime's ownership of the company. During that time, they had been very actively meeting with all the constituents of the business: customers, unions, drivers, operations and sales people, office personnel, equipment suppliers, government agencies, freight brokerage agents, et al. The message was pretty much the same. "We're putting millions of dollars into this company to bring it back to life and grow it. We need your help." For many of us, we had no clue it was in deep financial distress.

Feedback scuttle-but from the drivers was that the company was asking for deep cuts and concessions from the Teamsters Union, which represented them. Translated, it probably meant they would be coming to the rest of us shortly. The difference being that they would have to negotiate with the union. With us, they would just tell us how it was going to be.

At about month 3, they backed-up our current pay date by one week. In the past, we were paid one week behind - the work week ended on Friday, and we were paid the following Friday. Now it was going to be 2 Fridays after the end of a work week. Multiply that by 400 employees, and that was a chunk of money not being paid out. They said it would be used to purchase some badly needed new 53' semi-trailers. Seemed reasonable to me. We were all going to have to sacrifice to make the company grow. 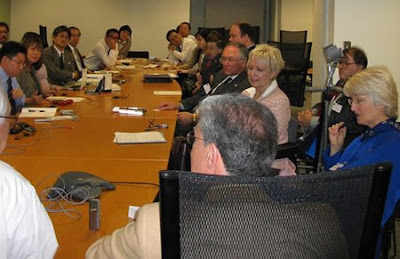 In the same general time period, I was a participant in a sales meeting in our Corporate Headquarters Conference Room. Other Sale Reps and Regional Managers were also present. One of the ideas that was seized upon by the new regime was that we needed to recapture some portion of Government Business which, for various reasons, we had lost in the past year.

Who here should be assigned that task? Government Agencies have all kinds of special requirements to meet re bidding and pricing and various other red-tape issues. Somehow, because of my very diverse experience in various aspects of our company, my name got offered for the sacrifice. Once others got someone other than themselves in the spot-light they were, symbolically at least, off the hook - for now.

I forgot to mention one special person who was also in the room. He was present in most of our meetings. He always sat back in a corner and observed. He never said anything. He always accompanied the CEO. He was younger ... had a muscular build ... his last name ended in a vowel ... and he had a noticeable bulge under the left arm-pit area his suit coat.

After I had been duly acknowledged for taking on this new task, I felt this very strong hand grasping me by the left shoulder from behind. I looked up and over my left shoulder. It was the mysterious and somewhat frightening stranger from the corner of the room. He bent over and whispered in my ear, "We're sure you'll do a good job ... won't you?" And he returned to his corner.
============
[to be continued as time is available]

It KILLS me that you leave us hanging like this! That's just plain MEAN!