At Easter Sunday Mass, parishioners were 'thanked' for all those who probably volunteered to help in surrounding neighborhoods that had been affected . The celebrant priest commented that the local mayor had hoped to get about 50 volunteers to help fill sandbags - on day one 500 showed up; on day two a thousand showed up. Christ is risen - indeed!


The celebrant and Deacon filled their roles ably. The homily by the priest was poignant and concise - lasting less that 10 minutes. They were assisted by 2 altar servers, both male teens. They rang bells during the eucharistic elevations. The two non-gospel 'readers' were women.

The music was led by 2 guitar players, one male and one female [the woman was also a vocalist], another non-musician woman vocalist, and a male 60-ish bongo player/harmony vocalist. He actually was an fairly accomplished bongo player, compared to some I recall seeing elsewhere - and he didn't get 'showy', but played to provide a rhythmic beat to the other musicians. BUT, I felt I was back in the seventies with their selections. No, they didn't play Kumbaya, but there were a lot of peace and shalom entries on their list.

Aside from the song selections, it was still a great Easter Liturgy. The numbers of older parishioners, and the younger families with children, and the middle-aged empty-nesters all celebrating together. I wondered how many of these have been there anytime since Christmas ... then I thanked God because they were there today. Just in case some had not been there since Christmas, the pastor arranged for it to snow during the Mass - this is what we saw when we exited. 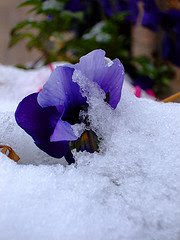 . . . . . . . . . . . . . . .
mea culpa
. . . . . . . . . .
A lot of ink and air-time has been expended this past week concerning the speech give by Senator Obama about race relations in the United States. I have heard many comment that it is an excellent oration and contains ideas for all to consider. It is being suggested by some that it is the most important commentary on racism in our country in our history.

My hope is that we, as a people, are able to bury the shame of our racist past under the weight of a new found appreciation of our value as children of the most high God. All of this focus has caused me to confess in a commentary on another's blog about my own shame.
. . . . .
one of my most heart wrenching memories,
one which carries hurtful shame and guilt,
is one in which i used that 'N' word.
i hurled it towards another young boy -
i was probably around 10 yrs old
he was a couple of yrs younger.
this ugly memory raises its head every once in awhile.
i deeply regret it.
i say a prayer of repentance each time.
i pray it didn't 'harm' the other boy -
but reality tells me that it couldn't not.
i ponder where and when i might have learned it.
ours was a blue-collar community.
my father was a refinery worker.
was it at his knee?
my mother taught us better.
we saw her reach out to lesser advantaged -
regardless of skin color or nationality.
by high-school black friends came to our house regularly.
one, roger, came to our house for breakfast.
he'd ride the public transport bus.
he'd get off at our corner and come in.
we'd eat and walk the two blocks to school together.
i hope the next generation finishes the job.
racism has no place in God's creation.
father, forgive me.
. . . . .
What is your story? Surely you have one to share.
. . . . . . . . . . . . . . .
He is risen! Alleluia!
. . . . . . . . . . . . . . .

My Holy Thursday Mass was just awful...it was Lieteen, was a combination hoedown/Rock concert. The Lifteen drummmer/guitar player at my parish is a performer, and unfortunately, our Music Director is a performance artist as well. She may have a degree in sacred music, but ever since she came on, she's sure been showcasing her talent and the previous cantors are lucky to get a note in edgewise. And they don't get to belt out the crescendos during Holy Communion Meditation like the MD does, against a background of warbling guitars and bongo drums.

Sorry...it just disturbed me so much it nearly drove me out of Mass. I DID cover my ears several times, trying desperately to pray something other than "Dear God make it STOP!"

I wrote about it extensively. Our priests are very reverent, the parts of the Mass were great, and it would have been a GORGEOUS Mass had the sound system been completely crippled.

But it's Easter...and God is good.

I had a miracle, will show you later.