This is a real story. Real names are being used. Real people are involved.

His name is Mitch. He's in his early thirties. He is a nephew of close friends of ours - Cindy and Tim. Mitch lives in Ohio. His aunt Cindy is a sister to his mother. Aunt Cindy and uncle Tim live in Oklahoma. My wife and I live in Indiana.

Two or three years ago, our friends, Cindy and Tim, put out a request for prayers for their nephew Mitch in Ohio. He 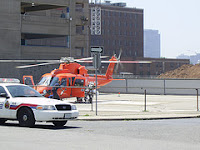 had been in an accident and had been transported by helicopter to a major trauma center in Ft. Wayne IN. The town Mitch is from is about half-way between Ft. Wayne IN and Toledo OH. He suffered some very bad injuries to the head.

Many people prayed. Mitch eventually got better. Mitch returned home to NW Ohio and all seemed to be going OK.

This past spring, March 2007, another plea for prayers went out from Cindy & Tim - Mitch again - major head trauma again - this time brought on by a blow to the head by an iron bar.This time he was taken to a major trauma center in Toledo OH. Again, people prayed.

A couple of weeks passed and word went out that Mitch had been in a vegetative state since arrival at the hospital. Doctors were not optimistic at all. For a couple of weeks, every medical test and procedure they tried failed. Brain activity was apparently very much non-functioning. Mitch was on full life support. The prognosis was terminal.

My wife, aunt Rozann, is a middle-school science teacher. On the weekend in late March that she was starting her school's Spring Break, we received more word from Cindy and Tim about Mitch. Cindy's sister, Mitch's mother, notified Cindy that she was considering having Mitch removed from life-support. The doctors held no hope of recovery. She asked Cindy if there was anyway she could come to OH and help her make funeral and burial plans. Since Mitch was on full support and it would take Cindy a few days to make arrangements to come to Toledo, her sister said she'd wait a few days before pulling the plug. That way Cindy could be there and help her with all that would be needed.

Aunt Rozann is from a small farming community in southeastern Michigan, just across the state line from Toledo OH. Her father was in an assisted care facility just outside Toledo. We were already planning to go visit her dad during Spring Break. We advised Cindy and Tim that we would be in Toledo on Tuesday morning, not only to visit Rozann's dad, but to have lunch with a brother and sister of mine. We asked for information on where Mitch was, including room number if they had access to that info, and said we wanted to stop by and pray with Mitch and his mother.

We come from a very Catholic Charismatic background and when we say we want to pray with someone, especially like Mitch, we intend to ask for healing and expect things to happen. Of course G-d is G-d and He calls the shots - all we can do is ask, albeit rather intensely.

We arrived at the hospital around 11am. We found the room in a 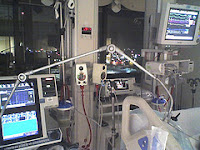 critical care unit. His mother and a younger niece of about 11 years of age were there with him. We talked with his mother at some length [we had met her before several years ago]. Mitch was still all hooked up. His mother told us that the orders had been issued. He would be removed from life support as soon as a room on another floor became available. She added that she reneged a little in her instructions - she wanted the feeding tube left in. For as long as his body was alive, she wanted it to be fed. We prayed ... then we left.

Mitch was moved to another floor. All life support equipment was removed, except the feeding tube. They did continue to leave telemetry equipment on so they could monitor his condition. Aunt Cindy was to arrive in the next few days from Oklahoma to help her sister with funeral arrangements.

When they placed his flaccid body in the new bed, they kind of propped him up. While they were doing this, his body 'twitched' and his hand 'grabbed' the nurse's arm. This was explained away as an involuntary muscular reflexion. Sometime later, he coughed. Sometime after that, he 'fell out of bed'. Things were happening. His body was moving in ways that could not be explained.

It was during this that the little sister, whom we saw standing next to the bed stroking her uncle's arm and holding his limp hand when we were there, told her mother that after we left she thought she felt Mitch try to squeeze her hand a couple of times.

With the onset of the following events, Aunt Cindy didn't have to make the trip to help with final arrangeme

nts. She did come a week later to much happier circumstances.

Within the next days, Mitch was being helped to walk the halls. Soon after they moved him to a rehab unit. In another couple of weeks he went home.

Mitch was not a 'churched' individual. His aunt Cindy told us afterwards that he is now a 'believer'. He still is not a church goer, but he is willing to tell everyone and anyone who will listen that G-d performed a miracle for him. He also claims [and some scoff at this] that shortly before he remembers opening his eyes, he 'died' and met his deceased grandfather, who told him it wasn't his time yet, and he'd have to go back ... and he did.

Mitch has been given a couple of significant second chances in his life. This one seems to have been miraculous. I don't know what G-d has in mind for this young man, but I hope he's able to find it and do it. It would appear the miracle was not because of anything Mitch did or said but because others interceeded for him and G-d answered.

Wow! God is so amazing!! It's so counter productive for us to worry about our lives. He will always take care of us. But yet we all do!
OK, Uncle Jim, I'll write a second chance story. But I warn you I am really a terrible writer, good with numbers, lousy with words. Do I write it in the com box?

mj
G-d is good - all the time!
write it in the com-box
i'll transfer it to a post
thanks for stopping by
and i'm sure your story will encourage someone else

i hope you can help me get others to write, also

Wow. Three or 4 days on the web, and already a great blog with great stories.

Dennis,
Your turn.
write me a 'second chance' story.
every entry will give some other reader hope

Uncle Jim, nice blog! I found it through Adoro. I don't have as dramatic of a second chance story as the one you just told. But we did survive a car wreck in 1995 which totaled our car. We escaped with (relatively) minor injuries; the state trooper who arrived on the scene said he was sure he would find a dead person or persons, the way the car looked. But God wasn't finished with us yet. I broke my elbow and it never regained normal range of motion. It just serves as a reminder, if I need one sometimes, that my life is not my own.
Keep up the good work!

You could say my vocation is a 2nd chance. But that's all I'm saying. The rest is for family.